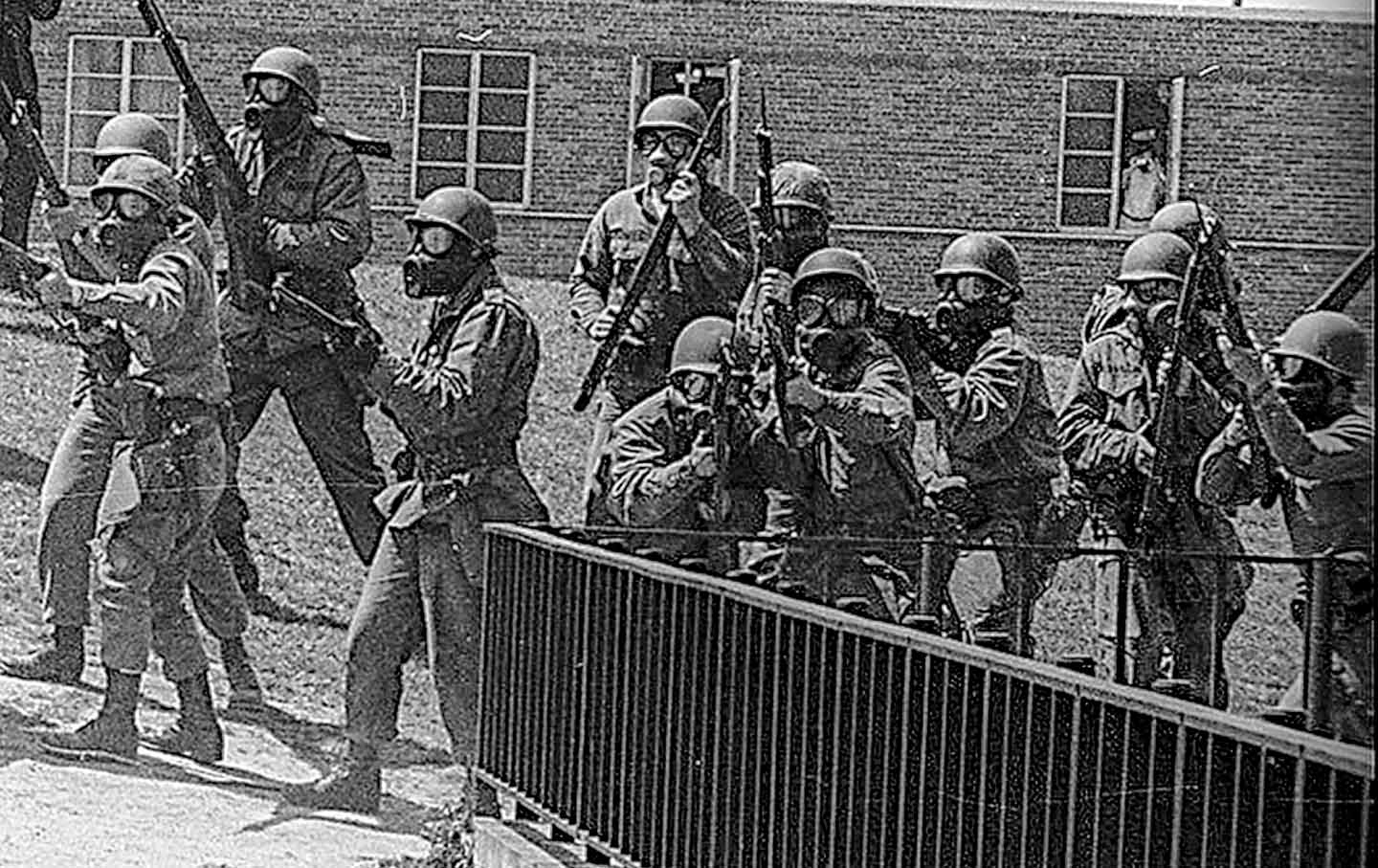 Ohio National Guardsmen in gas masks as they aim their weapons on the Kent State University campus during student anti-war protests on March 3 and 4, 1970. (Howard Ruffner / Getty Images)

Thank you for signing up. For more from The Nation, check out our latest issue.

The Nation is reader supported: Chip in $10 or more to help us continue to write about the issues that matter.

Thank you for signing up. For more from The Nation, check out our latest issue.

Travel With The Nation

Be the first to hear about Nation Travels destinations, and explore the world with kindred spirits.

Both Nixon and his bellicose vice president, Spiro Agnew, had been doing all they could to arouse antipathy between their conservative supporters, whom they valorized as America’s law-abiding “silent majority,” and anti-war protesters, whom they demonized as lawless countercultural subversives. The impact of this politics of resentment could be seen in the Ohio grand jury proceedings that in the name of “law and order” sided with the National Guard, including the killers among them, while indicting 24 Kent students and one faculty member.

Dean Kahler, a Kent student, paralyzed by a guardsman’s bullet, experienced this resentment in its ugliest form. While recovering from his wound, the first card Kahler opened was inscribed “Dear Communist Hippie Radical, I hope by the time you get this you are dead. We don’t need people like you.” Sentiments such as these led Rick Perlstein to conclude in his magisterial work Nixonland: “Do Americans not hate each other enough to fantasize about killing one another in cold blood over political and cultural disagreements? It would be hard to argue they do not. How did Nixonland end? It has not ended yet.”

But this may give Nixon too much of the blame for igniting America’s hatred-fueled politics, because when one factors in race, that hatred took root long before Nixon’s presidency. It is not the murder of white students at Kent but the Jackson State massacre, 11 days later (May 15, 1970)—in which two African American students were killed and 12 wounded by the Mississippi State Patrol, who, over the course of 28 seconds ,riddled their dormitory with bullets as if it were a military target—that speaks to this older, deeper pattern of hatred, and its legacy of racist violence. Nixon’s cynical comments on Kent in the Haldeman diaries were loathsome, but so was the president’s silence on the Jackson State killings. The black lives lost on that historically black college meant nothing to Nixon either politically or personally. The massacre elicited much less protest (which came primarily from black campuses) and media coverage than Kent State.

Historians too have been slow to study the Jackson State shooting, and even slower to probe the Orangeburg massacre of 1968, sometimes mistakenly called “the black Kent State before Kent State” (it was a racially motivated massacre more similar to the Jackson than to the Kent State shootings) in which the South Carolina State Patrol killed three African American students and wounded 28. Nor have narratives of the student movement of the Long 1960s noted that this era’s violent campus upheavals began and ended with racist assaults: First came the segregationist riots at the University of Alabama (1956), the University of Georgia, (1961), and the University of Mississippi (1962), later the more bloody Orangeburg and Jackson State shootings.

To commemorate the Kent and Jackson State tragedies on their 50th anniversary, we offer accounts of Kent by historian Thomas Grace, author of Kent State: Death and Dissent in the Long 60s (2016), who was himself among the wounded at Kent State, 1970, and of Jackson by Nancy K. Bristow, author of Steeped in the Blood of Racism: black Power, Law and Order and the 1970 Shootings at Jackson State College (2020), the first book by a professional historian on the Jackson State shootings since that tragedy occurred.

Power and politics: the case for linking resilience to health system governance – World

http://orcid.org/0000-0002-3448-7983Stephanie M Topp1,2 Since the watershed moment of the 2014 Ebola epidemic in West Africa and again in the midst of the current COVID-19 crisis, the concept of health system resilience has been a recurring […]

Australia preparing to spend up in south-east Asia to counter Beijing: sources

The Morrison government is still considering the package, with the final decision on cost and scope to be made in the coming months. Loading The sources said the package would focus on countries along the […]

Authorities in Cambodia’s capital Phnom Penh on Thursday arrested half a dozen youth activists taking part in a peaceful protest to demand the release of union leader Rong Chhun, as he appeared before the court […]