The COVID-19 pandemic has been spreading like wildfire around the world, and online, so has misinformation and fake rumours about the disease. From Twitter to Facebook, to YouTube and TikTok, you’ll find people saying that homoeopathy can cure coronavirus, that fifteen minutes in the sun will kill off the virus, or that 12 hours of isolation is all it takes to stop it from spreading. Convoluted messages about the impact of sound waves on the disease went viral in minutes, possibly reaching more people than information from the government, or advice from doctors.

One of the reasons why misinformation has been such a problem is because — like the virus — in the digital space too, there are some “super spreaders” who, probably with the best of intentions, have ended up posting misleading messages, or giving completely wrong information to their legions of followers, who trust what these celebrities and influencers are saying, which could lead to real problems.

This was particularly clear last week, during the Janata Curfew of March 22. Bollywood superstar Amitabh Bachchan tweeted, “Clapping shankh vibrations reduce/ destroy virus potency; Moon passing to new ‘nakshatra’ Revati. Cumulative vibration betters blood circulation.” This was a common theme expressed in many WhatsApp forwards, and after the curfew ended, the streets were full of people gathering, cheering, and clapping about ending coronavirus. Bachchan was obviously not to blame for all of this, but a celebrity with his following sharing such misinformation likely contributed. Although the tweet has since been deleted following intense criticism, it was retweeted 254 times and liked by around 2,300 people, showing how far it reached. 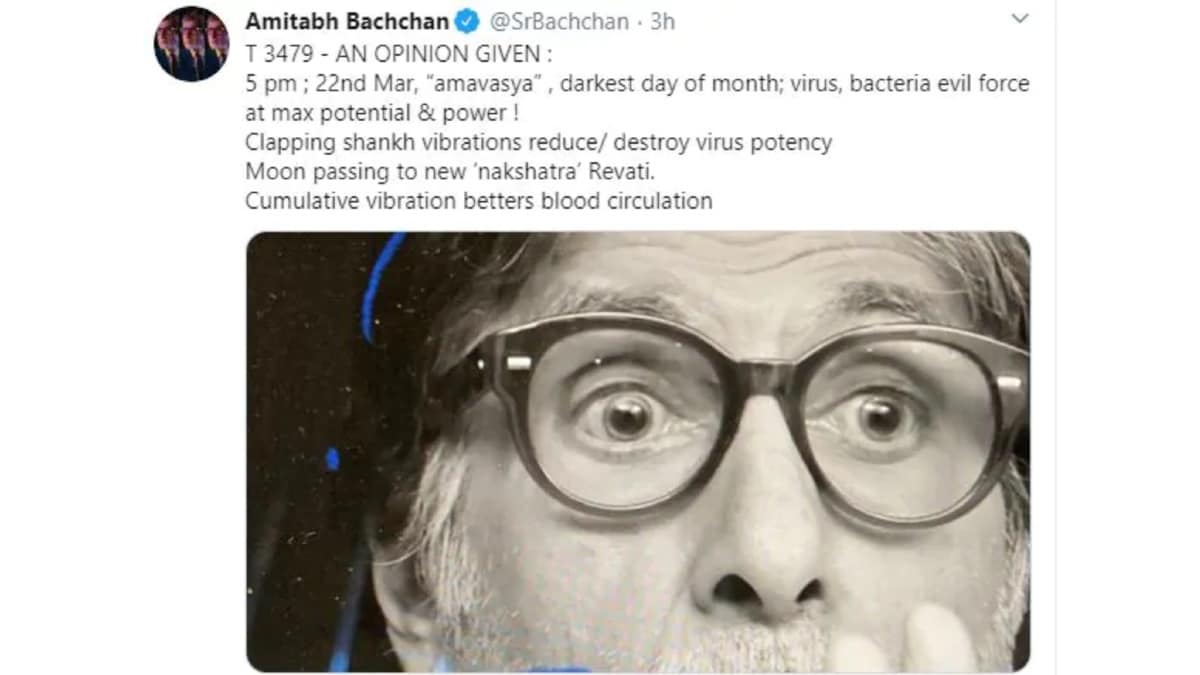 If this wasn’t enough, the famous actor once again came under scrutiny for his tweet after he was found promoting a website to get Coronavirus updates, which he said is the official website. However, if you visit covid19india.org, the answer to the first FAQ informs everyone that this indeed is not an official website but instead it is a crowdsourced patient database.

T 3481 – Finally India got its Carona Dashboard
This is the official website for CORONA updates. Updating every 4 hrs..
open it .. see .. scroll down for more details .. place finger on your State and get the numbers info ..https://t.co/uNyPkG2luF pic.twitter.com/akg3Kj5Sbt

Bachchan isn’t the only major celebrity that has posted misinformation around COVID-19 either. Sonu Nigam was also trolled after his video about coronavirus dying off in 12 hours went viral on social media. The popular Indian singer can be seen in the video talking about the Prime Minister’s brilliant step of implementing the Janata Curfew and how this is going kill the virus before even the curfew ends.

‘Iconic, legendary, masterstroke’ Sonu Nigam explains the great scientific discovery that India is the first to roll out. pic.twitter.com/FaNM1gxyeG

Malayalam TV actress Sadhika Venugopal also had to face backlash for her post on Facebook where she listed preventive measures to get rid of the disease and even attributed the information to UNICEF. Following this, UNICEF Cambodia addressed in a tweet stating that the news shared by the actress is totally fake and people should only trust information coming from verified UNICEF platforms. Venugopal then apologised for spreading fake information and she added that the content on his social media is handled by her promoters and she was not aware of any such post.

Famous South Indian Superstar, Rajinikanth also tweeted a YouTube link along with a statement that urged people to stay at home during the Janata Curfew so that the virus could be contained in 12-14 hours. The tweet was soon taken down by Twitter itself, because it violated the company guidelines and was apparently misleading for the audiences.

Although in all these cases, the negative reaction from fans made these celebrities rethink their posts, it’s an important reminder that just like the rest of us, celebrities are also susceptible to falling for the same misinformation and fake news that is circulating on all platforms. The difference is that with their millions of devoted followers, any fake news that these celebrities amplify reaches not just our immediate circle of connections, but going viral, like a disease.

How are we staying sane during this Coronavirus lockdown? We discussed this on Orbital, our weekly technology podcast, which you can subscribe to via Apple Podcasts or RSS, download the episode, or just hit the play button below.

Backtracking Angelina Jolie wasn’t exactly truthful about not meeting Jennifer Aniston before her split from Brad Pitt. Showbiz golden couple Jen, 51, and Brad, 56, wed in 2000 but divorced five years later. Prior to […]

Recommended for Travellers on Netflix

Are you an enthusiastic traveller who may have cancelled all your trips and spent most of your time indoors due to the pandemic? Before you are allowed to head out again, here are our picks […]

Getty Images In this historic moment, there is no middle ground. The choices are to support the notion of equality, liberty, and justice for all, or not to. Patriots cornerback Stephon Gilmore, the 2019 NFL […]